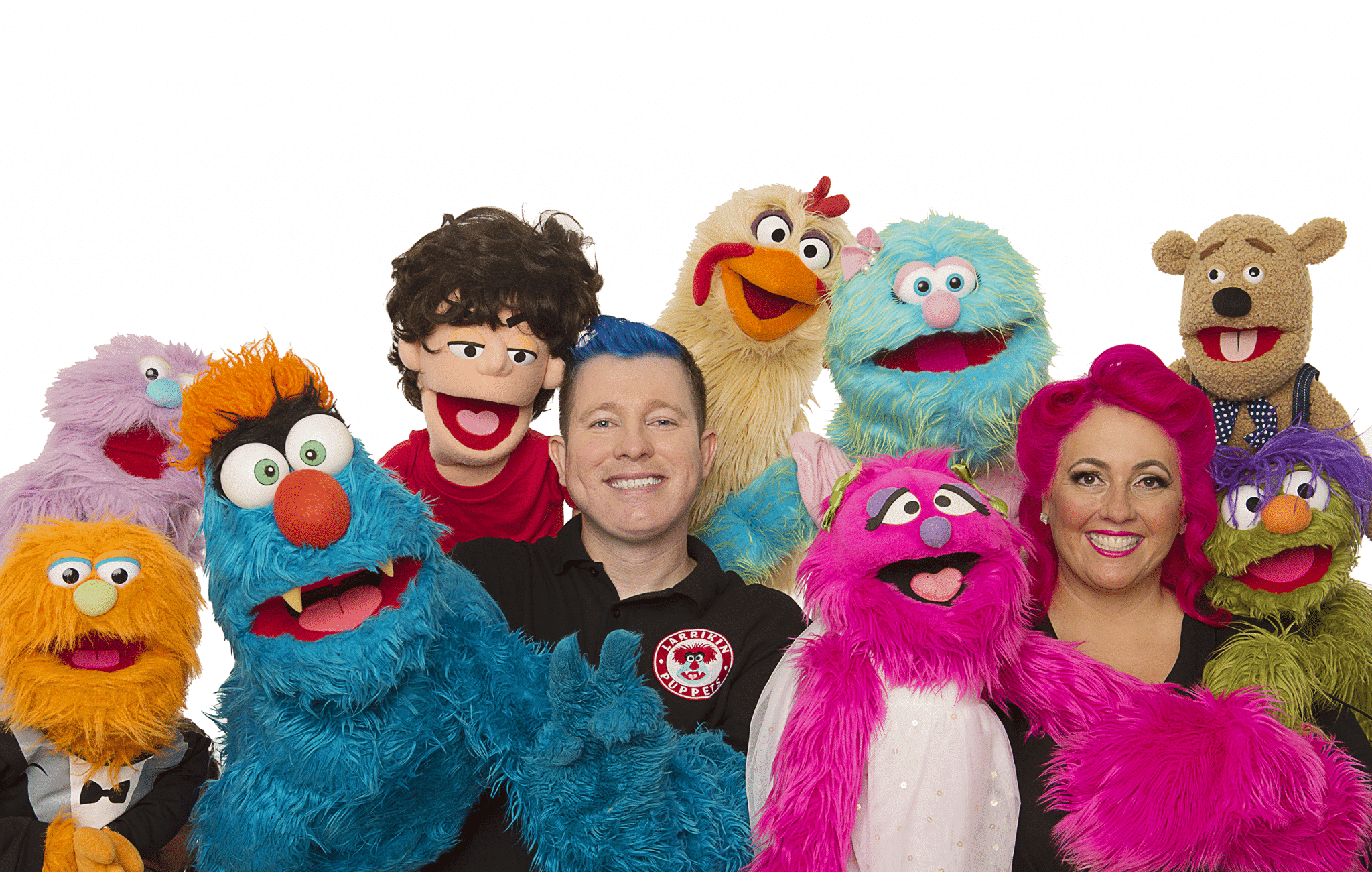 Brett Hansen: Hi, we’re doing well. We isolated for about six months (only performing virtual/online puppet shows via Zoom and Facebook Live). We kept our distance from others and maintained good hand hygiene throughout the pandemic. Thankfully this has prevented us from getting sick.

Tell us about you, your career, how you founded Larrikin Puppets.

Brett Hansen: I’ve been playing with puppets since I was three years old and always wanted to be a puppeteer. It’s a dream I have followed my whole life. I was fascinated by the work of Jim Henson, who created the puppet characters in The Muppets, Sesame Street, Fraggle Rock, and many more. I grew up watching and learning how the characters worked, reading all about Jim Henson, and performing my own little puppet shows at home for my family and at school in the library during lunchtime.

After graduating from High School, I studied animation and film and TV. There were no courses in puppetry here in Australia. I am self-taught.

I am also a cartoonist and a musician and played piano in many bands over the years – including a fairly well-received metal band called “Headkase,” which lasted for 13 years.

Getting into puppetry properly and full time is very difficult and didn’t happen until I was in my thirties. While playing in bands and drawing cartoons, I was also working full time in very dull, exploitative workplaces like call centers, supermarkets, and janitor.

In 2012 I auditioned for a role in a popular Broadway puppet musical called “Avenue Q.” This was a production in Brisbane, Australia. I was not only cast as one of the puppeteers in the show, but I was also asked to train the other actors in puppetry because I was the only one with puppetry skills. There aren’t many puppeteers in Australia, particularly of the Henson/Muppet style, so actors (rather than puppeteers) are cast in the show, and then they’re taught how to operate the puppets properly. I worked on Avenue Q at nights and on weekends, and it was a side gig around my full-time day job.

Here in Brisbane, Australia, at the time, there was a program called NEIS – New Enterprise Incentive Scheme, which was designed for unemployed entrepreneurs looking to start their own businesses rather than continuing to apply for unfulfilling jobs. Through NEIS, I was able to attend classes and team up with a business mentor to set up a proper, functioning, legal puppet show business with all the right licenses, insurances, social media and marketing tools, and everything else I needed. Larrikin Puppets was born.

Through hard work, I started getting puppet show bookings at schools, childcare centers, libraries, shopping centers, birthday parties, and festivals, and also cast to perform puppets in short films and TV shows. Larrikin Puppets grew significantly into the full-time entertainment business that it is.

My current wife Elissa joined me as co-puppeteer and artistic director in 2016 after we received some advanced training in the USA by some of my heroes – the Jim Henson puppeteers who work on Sesame Street and The Muppets.

Today we regularly tour around Australia with our puppets, performing shows, running workshops, performing on film and TV, and even releasing original songs on platforms like Spotify and Apple Music.

How does Larrikin Puppets innovate?

Brett Hansen: It’s not often that a puppetry company does more than performing a standard show (such as Punch & Judy). We perform all sorts of different themed shows for all kinds of clients – all starring our original puppet characters such as Troggg the blue monster, Marina, Frazzamatazz, and Scrambles. Based on the training we received in the USA by the Henson puppeteers, we teach all of the basic techniques to students at schools and theatre companies. Muppet-style hand puppetry isn’t very common in Australia, so we’re teaching skills that nobody usually gets to learn. I never got to learn these skills properly in Australia. I had to get my formal training overseas. So now we innovate by providing that training here in Australia. The other unique thing that we do is utilize my skills as a musician to write and release our own original songs – sung by the puppet characters (or the funny voices we do for the puppet characters).

Brett Hansen: Our schedule is usually quite full of bookings. But all of our bookings between March and August were either cancelled or postponed due to everything being closed down and everyone being in lockdown due to the pandemic. Luckily in Australia, we had a very helpful government payment called “Job Keeper,” which I, as a small business owner, was able to apply for to stay afloat during the lockdown. During this time, we had to learn how to do online/virtual performances using Zoom and Facebook Live, learning how to use webcams and lighting, etc. So we performed quite a few shows for different clients, as well as free shows for our social media audiences. The payment isn’t as much for online shows because it doesn’t require all the traveling we usually do, or the same level of load in, set up, and pack down as there is at our live performances. Eventually, our state of Queensland here in Australia opened up again for live performances. We started back in September and have been super busy since – with several of the postponed performances booked in from September onwards, plus lots of new bookings and film shoots that we’ve been squeezing in.

Brett Hansen: I don’t think we had any choice at all during the lockdown period. We just stayed inside and kept ourselves and others safe. The choices we made to release some songs earlier than we’d planned and to perform lots of online shows sort of happened organically. We didn’t want to disappear from people’s radars. We wanted to stay relevant. During the pandemic, we also joined TikTok, which was a great decision because we got to make lots of creative short videos with the puppets and have gained 27,000 followers there!

Brett Hansen: We try to schedule in some time away from the computer (doing all the bookings, emails, social media) and time away from performances too – even if just for a few days. It means we get a few days to sleep in without an alarm and catch up on sleep. It’s pretty normal for us to be up at 4 am or 5 am a few times a week, and this can catch up with us. Music helps too and going for a swim or a walk.

Brett Hansen: Rather than feel like we’re competing, we like to support our fellow children’s entertainers. There aren’t too many others doing the style of entertainment that we do. Our “competitors” are mostly children’s bands/musicians, science shows, magicians, sports and fitness training, and corporate costumed character shows. When it comes to other puppeteers, they’re usually marionette performers, ventriloquists, and Punch & Judy shows. We stay in the game by just doing what we do. We do it well and pride ourselves on that.

Brett Hansen: We at Larrikin Puppets love to bring fun, color, laughter, joy, music, play, and kindness to our zany and funny puppet shows for family audiences. It’s been really great to bring all of that to our audiences over the last eight years in business.