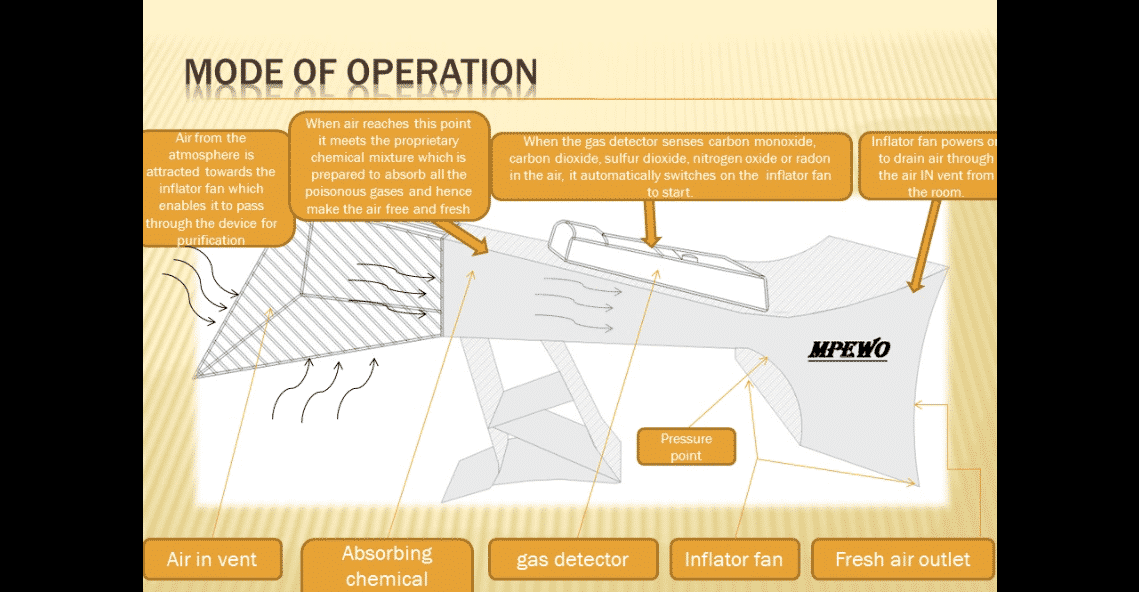 Tell us a few words about the founders and how the idea came :

In refugee camps indoor pollution is one of the major causes of death with only Kyangwali refugee camp in Hoima district where Angella was born and raised having an average 50 annual deaths out of a population of 220,000 refugees in the area.

We first met at a conference that emphasized development of Africa through innovative solutions, we were all challenged to brainstorm and try to bring up ideas that could take Africa to the next level using the Sustainable Development Goals as a guide, so we identified goals 3, 7 and 11 since they addressed a problem we have grown up facing and so we used design driven innovation approach to come up with such a solution and so in the first place our aim was just helping people affected by indoor pollution but later we noticed it could do more than that.

Your products and services :

Our current product is the Mpewo air purifier which is a  low cost device used to purify air in the atmosphere from gases that are harmful to human life using solar power. These gases include carbon monoxide, carbon dioxide, sulfur dioxide, nitrogen oxide and radon; it is inbuilt with our proprietary mixture that helps to absorb these gases once their presence is detected in the air though at the moment it is able to only detect carbon monoxide and carbon dioxide.

At just $80 besides from being 3 times cheaper than the typical air conditioner, it can also be able to condition the air in the atmosphere just like they do but purify it at the same time. We are also putting in place a system only in Kyangwali refugee camp that enables the extremely poor who earn less than $2.50 dollars per day to be able to get it through allowing them to pay in installments payable in 8 months and so they will be paying less than 0.3 of a dollar per day, the other advantage the device has is the fact that it uses solar energy which makes it usable in most African population because electricity coverage is just 5%.

We are unveiling our first semi-permanent house in May 2017 that will be designed to have this system installed.

We are a team of two enthusiastic founders who have both had indoor pollution killing a lot of loved ones and many others who have died of cancer, we have both grown this desire to fight this so that we can achieve our dream of saving people especially those who are less privileged using our innovative skills and expertise who have both have been through fields of study relevant to our startup.

We are joined by a team of 11 hardworking employees who almost have the same passion and work so hard to build this from a startup to a large social enterprise in future.

We have developed this innovation at the time where the it is needed the most because pollution right now is one of the world’s biggest problem, we have been in touch with two Chinese business men who were inquiring about our device since the country is the most hit with pollution and our device and semi-temporary house would definitely work in all countries with indoor pollution.

This startup is one that will mainly rely on profits and therefore will need minimal dependence of sponsors and funders to survive unless a potential investment to make our growth faster.

Ever since we were kids, air conditioners have always been seen as luxurious items to have as they could only refresh the air and most people especially in Africa up to now do not see any reason why they should spend their little income to have that given the fact that they are also very expensive.

Unlike the typical air conditioners in the market, the Mpewo device not only refreshes the air in the user’s surrounding but also purifies it by removing gases that may potentially be harmful to their lives using solar energy and since electricity covers just 5% of households in Africa which is our target market, solar has proved to be more effective and realistic to use more than electricity.

Since we want even the households that earn less than $2.50 per day to have this device because they are so affected with indoor pollution, we have provided them to pay for this device in installments payable in 8 months which no air conditioning company has done so far.

Your business model (how do you make money?)

We make money from the revenue we get from sales of our products and currently it is the Mpewo purifying device which we produce at a net cost of $50 and we sell it at $80 and so our profit margin is $30 per device and we are hoping to reduce this price as our startup grows as we will have started enjoying economies of scale so since we want to impact as many people as possible this device will be cheaper when we break even.

Our competition is mainly made of foreign large technology companies like Samsung, Sony and Panasonic the most common in Uganda who manufacture air conditioners which mainly use HFC gases and electric fans. Not only are these devices 3 times more expensive compared to our Mpewo device but they also do not protect the user from gases that are potentially harmful to their health.

Related Topics:export-enHealthSocial and environmental responsibility
Up Next