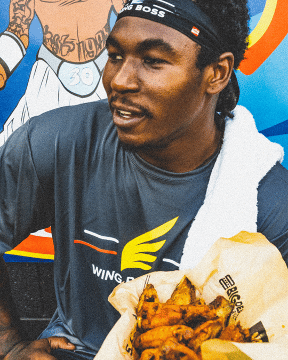 Game on – NFL season is set to kick off in less than a month and your snack game matters just as much as the football games! Whether you’re playing armchair quarterback at home or throwing a tailgate party, it’s time to chow down on some game-day food. Huddle around the table with your squad for some succulent grubs as the NFL teams huddle up! Wing Boss, Dickey’s Barbecue Pit’s exciting wing joint launched a limited-edition meal deal in conjunction with NFL superstar Jamaal Williams. The limited-edition “The Jamaally Wally Meal” features a 15 bone-in combo with crowd-pleasing flavors Lemmon Pepper and Buffalo Mild. It also includes a large size of crazy Cajun fries tossed in Cajun sauce, topped with Jalapeno cheese sauce, and drizzled with their house-made ranch. The highlight is Dickey’s signature Big Yellow Cup that comes with the meal deal! If you want a guaranteed home run, stock up on Wing Boss’s finger-licking barbecue wings that are sure to hype up the crowd!

Jamaal Williams, Detroit Lions running back, has garnered a lot of praise due to his bubble personality and passionate speech that instilled grit in his team. Jamaal Williams recently delivered a motivational “Hard Knocks” speech at Lions camp that has since gone viral. In the video, he told his team to think of that record last year whenever they feel tired. It makes sense that he has been deemed as a “national treasure” in the NFL realm. In honor of Jamaal William’s spirit, Wing Boss decided to make Jamaal their brand ambassador and launch a special meal with him. Owned by pitmaster Dickey’s Barbecue Pit, which has been a household name for decades, Wing Boss is a rising wing joint that prides itself on making barbecue wings authentically flavored and made with love. They slow smoke the chicken wings in a controlled temperature and humidity range, letting them soak up the hickory flavor in the wood-burning pit. 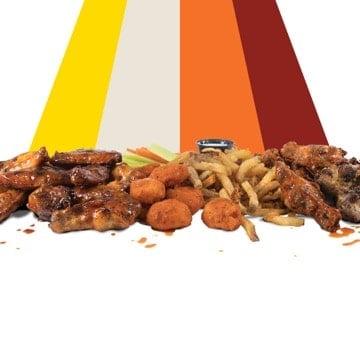 “The Jamaally Wally Meal is not for the weak! It’s for people with big stomachs” says meal deal namesake, Jamaal Williams of the Detroit Lions. He has also posted some entertaining videos on his official Instagram account, expressing his support for Wing Boss.

Earlier this year, Wing Boss also teamed up with another NFL superstar Sam Williams, the Dallas Cowboys’ defensive end. Wing Boss did an Xbox Mini Fridge giveaway with Sam Williams’ signature on it for Father’s Day. The mini fridge was a perfect gift for Dads that are NFL fans who love cracking open a cold one on a game day. Whether you’re rooting for the Detroit Lions or Dallas Cowboys, you can’t go wrong with Wing Boss’s succulent and crowd-pleasing wings!

Crank Up the Heat with Wing Boss’s Pit-Smoked Wings

Owned by Dickey’s Barbecue Pit which has a long history of delivering Legit Texas Barbecue, Wing Boss takes Dickey’s heritage and applies it to smoked chicken wings. The first stand-alone Wing Boss location was opened in Addison. The company also announced a ghost kitchen concept which brings its menu to a hundred more restaurants of various types. Available for pickup, food delivery, and catering, Wing Boss is introducing its delectable pit-smoked wings, crispy boneless bites, and tenders to more than 100 locations in the country. Wing Boss also offers a wide array of crowd-pleasing flavors like buffalo, mango habanero, spicy Korean, Thai sweet chili, lemon pepper rub, and atomic, you name it! Their atomic flavor is not for the faint-hearted so be sure to wash it down with an iced cold beer. Or pair the meal with some side dishes like mac and cheese, seasoned fries, or Texas toast.

Whether you’re watching NFL games at home or throwing a tailgate extravaganza, Wing Boss is the go-to wing joint for game-day snacks and finger foods. Alternatively, you can check out the other virtual brands that are also under the Dickey’s Barbecue Pit’s umbrella, namely Trailer Birds, and Big Deal Burger. Trailer Birds offers blistering Nashville Hot Chicken and finger foods like Tater Tots; Big Deal Burger offers an eclectic range of outlandish and Instagram-worthy Barbecue burgers of beastly proportions. They are all available for food delivery and catering in different cities. There are so many game-day food ideas so be sure to check them out before the NFL season starts!

Extravagant Places to Visit in Dubai With Friends

How to Find a CTO for Your Startup‍