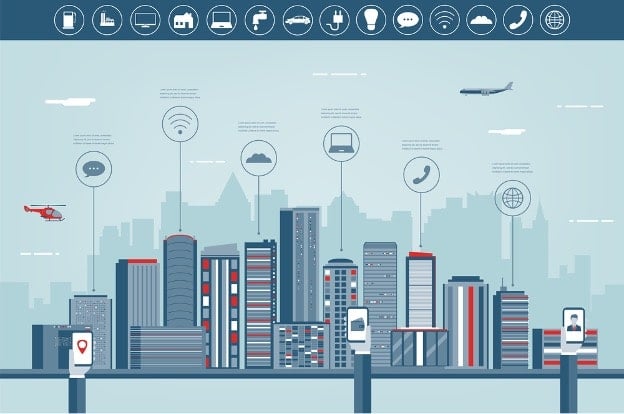 Densely populated cities are facing a plethora of tough challenges as their populations continue to rise. As more people migrate to urban locations the available resources, space, and medical coverage become more limited. Luckily, there are modern solutions that government organizations can use to overcome these growing obstacles. The idea of “Smart Cities” is a new and exciting option that may prove to be just what these cities need to continue thriving. Smart buildings that rely on the latest connected technologies are the heart of the concept. The ultimate goal is to improve the quality of life while reducing resource demand.

In theory, the Smart City technologies could be used to improve many different aspects of urban life. It could affect how a person lives just as easily as how traffic is managed. The actual results will be dependent on the specific applications used in the smart buildings and the ultimate goal of the planner. There are millions of buildings across the country that could benefit from these upgrades.

Those same buildings are also responsible for a large percentage of the country’s energy usage. Some buildings have already taken a step toward the future by relying on revolutionary concepts like The Internet of Things(IoT). The idea is to connect systems and functions that are not traditionally connected. By allowing some form of data communication between independent systems and then using that data to automate processes, a building owner could cut down on wasted energy tremendously.

The two most obvious examples of this functionality are lighting and temperature control. Smart buildings with internal systems connected to the IoT could automate lighting and temperature control according to data provided by sensors. Without a strong reliance on human input, the system would experience much greater efficiency and waste much less energy.

Cutting back on wasted energy and saving money are only two of the key benefits linked to smart buildings. The technology also has the potential to greatly improve the living quality for the occupants. For example, on a day with minimal cloud coverage, UV sensors would detect the brightness and dim the windows automatically thanks to IoT communication. The temperature could be automatically controlled according to the outdoor temperature or room occupancy. Small improvements like these could ultimately boost the productivity of employees or students.

The steps needed to move from a traditional building to an IoT-connected smart building are often faster and more affordable than a major remodel. There are several established companies helping building owners make the transition with an understanding of the technology being used. Lucid is one of the most well-known brands in the field and it is operating alongside Clinton Global Initiative to helm the Connected Cities program.

The major goal of Connected Cities is to assist 100 different urban hotspots to deploy connectivity into their infrastructure. They also aim to help to build owners better understand smart technologies so that they’ll know how to properly invest in the future. There are three fundamental elements that building owners should focus on to improve long-term sustainability and efficiency.

Many building owners start with a focus on capital and begin upgrading outdated systems where possible. However, some experts believe that a better starting point would be identifying existing systems that could be used in more efficient ways while teaching tenants about good habits.

On a larger scale, one of the first steps for a city would be to push for greater data production for analytics. Having more data available to analyze will make it much easier to identify inefficient patterns in usage. Existing data sources can be used but on a more frequent basis to paint a complete picture.

This is exactly what some buildings are already doing thanks to equipment provided by Lucid. For example, there are building owners who collect meter readings at a much greater frequency to avoid peak hour energy charges. The additional charges applied during peak hours can increase an energy bill by more than 30 percent.

Some organizations have already started to use the technology on an even larger scale. The Lawrence Berkely National Laboratory collects data from a total of 26 different buildings through multiple systems. This data was used to reduce natural gas consumption by half after only 60 days. The data collection revealed a significant amount of wasted energy, such as times during the night when the building was empty but was being automatically heated.

Efficiency management may be at the heart of the technology but it is not the sole function. If the applications were to focus purely on efficiency, then the quality of life in the buildings would drop significantly. The technology can function with multiple concepts, including health, comfort, and productivity.

Many cities are hesitant to commit to the advancements because of the cost. However, cities are finding that the improved savings from increased efficiency is a valuable asset that can be utilized in many different ways. Investing millions into deploying smart building technology creates savings that may become investments that eventually eclipse the initial cost of the upgrade. Ultimately, smart cities increase efficiency, improve the quality of life, and drive public funding higher in the long term.

Orlando is one of the latest cities to make a significant investment in Smart City technology. They have recently diverted $20 million towards the technology. The results of this movement will undoubtedly encourage other cities in the near future to make similar investments. It is very likely that we will see many more cities take the plunge in the near future and embrace progress.

Cities across the country continue to grow and evolve whether we want them to or not. That growth will have an undeniable impact on the work and lives of people who live in that area. One of the few ways that we can ensure it is a positive impact is by making our cities smarter. We can make that dream a reality step-by-step with one smart building after another.

How can a Virtual phone number help your Start-Up?