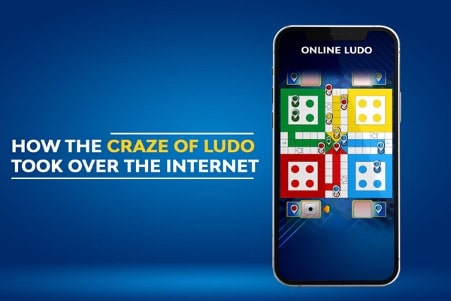 How The Craze Of Ludo Took Over The Internet

Ludo is famous for being the most straightforward board game available for a long time in the market. All the game requires is a board to play, a pair of dice, and up to 4 players can dive straight for a round of unlimited fun. The ludo game has been around for ages, and recently it has made quite a dent in the online gaming market. The game is top-rated and straightforward, making it fun and playable for people in all age groups.

The attraction toward online ludo penetrated the gaming market after the onset of the COVID-19 pandemic. People all around the world flocked in numbers to play ludo online. Like other games involving rolling of the dice, ludo has its origins in Indian history. It is derived from Pachisi’s ancient game, which the masses played quite favorably during the 6th-century. The game is highly addictive, and the random numbers rolled by the players make the game very uncertain and equally appealing.

The familiarity and ease of play bundled with nostalgia made ludo one of the most popular go-to games on the internet during the lockdown period. Let us see some other factors that drew millions of people to this old dice game that turned it into an online sensation.

Simple and Easy To Play

Anyone and everyone can learn the technique involved in the game. The player’s fate is dependent on the number that the player gets upon rolling the dice. The board has colors divided into four quadrants- red, green, blue, and yellow. Each team receives four pawns for their selected color quadrant. The player’s objective is to roll the maximum numbers on the six-sided dice so they can move the tokens around the board, leading their pawns to the winning grid. Players can match up to four other online players and use their skills in observation and strategy to score above them and win the game.

Especially in terms of online gaming, ludo is highly competitive, with every player putting in their best efforts to squeeze in a win. As the game is the easiest to learn, there is an inflow of more and more players daily. This fact alone raises the traffic to the game and increases competition. The ease of Internet availability has also led to more users in online gaming, which directly contributes to the rise in competitors of all levels and interests. The game can be easily downloaded on any device from the website by tapping on the download link, and players can match with online rivals within seconds.

Apart from the original style of the game, which is quite exciting in itself, the online versions provide even other modes which are more exciting takes on the game. In the Ludo Attack variant, the player is provided with only one pawn in the game. To roll the die, the player has to spin the wheel to get a chance to attack the tower of the opponent. After this, the player can jail the opponent’s pawn piece and proceed to win by advancing their token towards a win. The objective here is to push the piece to the finish point, just like in the original game of ludo. In addition, some tiles help you to attack and heal, which also increases the player’s final score. The other game Ludo Win is something that adds a different flavor to the original. Here the player is provided with four tokens, and they have to win the game with a set of limited moves while trying to score above their opponent. Players can formulate strategies to capture the opponents’ tokens and gain bonus points. These newly revised formats went down well with all online ludo players. Gamers started swarming in to get a piece of this recently evolved ludo game.

Despite being easily accessible and a fun game, the game’s user interface has to be something that should keep you coming back. Ludo does just the same by presenting an impactful graphic outlook that captures the audience’s interest. As a result, people online can have a round of ludo while experiencing fun animations and bright, vivid colors on their screen that are pretty entertaining and refreshing at the same time.

Since it is the oldest game in the Indian subcontinent, ludo draws in a huge fan following. As a game, ludo needs no introduction, especially in the South Asian region, as the offline version has been played for centuries. Traditionally and historically, ludo has had a significant impact on the lives of Indian people. The nostalgia attached to this game’s origin has helped it gain massive users in the gaming marketplace and skyrocketed its popularity.

From the lockdown beginning, ludo has been a gaming hit in the online Indian market with millions of downloads. Earlier it was only confined to the barricade of the household, but the online factor has shown people to redevelop their likeness and view towards this age-old game of fate and skill. Moreover, the nostalgia attached to ludo makes it even more popular in this period of the digital revolution. The game’s availability is easy, and the fact that you can play it anywhere at any given time makes the ongoing craze of ludo even more unreal.

Instagram Sponsored Posts: Everything You Should Know About Publishing It