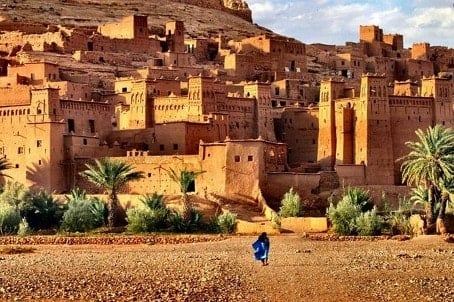 The partially excavated ruins of the ancient city of Volubilis preside over a fertile plain located approximately 22 miles (35 kilometers) north of the imperial city of Meknes. One of the best-preserved ancient sites in Morocco, the ruins offer a fascinating insight into the city that once served as the capital of the kingdom of Mauretania, and later as one of the southernmost cities of the Roman Empire.

Volubilis was founded by the Berber people in the 3rd century BC. C., and was part of Mauritania when the kingdom became a Roman client state after the fall of Carthage in 146 BC. C. In 25 a. C., King Juba II was placed on the throne and began to build his royal capital at Volubilis. Despite his Berber ancestry, Juba was married to the daughter of Mark Antony and Cleopatra, and his tastes were distinctly Roman. The city’s public buildings (including a forum, basilica, and triumphal arch) reflect the architectural styles of Roman cities across Europe.

In AD 44, Claudius annexed Mauretania, and Volubilis grew wealthy exporting grain, olive oil, and wild animals for use in gladiatorial shows to the rest of the empire. In the 2nd century, the city was one of the most important outposts of the empire and had 20,000 residents. The wealthiest families lived in fine houses with spectacular mosaic floors. Volubilis was invaded by local tribes in 285 AD and was never captured again by Rome. Instead, the city was inhabited for another 700 years, first by Latin-speaking Christians and later by Muslims.

In the late 8th century, it became the capital of Idris I, the founder of the Idrisid dynasty and the Moroccan state. In the 11th century, however, the city was abandoned. The seat of power was moved to Fez, with the residents of Volubilis moving to the nearby mountain village of Moulay Idriss Zerhoun. Book the 3 days tour from Marrakech to Merzouga online.

The Volubilis ruins remained intact until the mid-18th century, when they were largely destroyed by an earthquake. In the decades that followed, Moroccan rulers such as Moulay Ismail looted the ruins for their marble, which was used in the construction of various imperial buildings in Meknes. The ruins were only identified as those of the ancient city of Volubilis in the late 19th century, when they were partially excavated by French archaeologists. Throughout the French colonial period, the ruins were excavated, restored, and in some cases rebuilt.

In 1997, Volubilis was inscribed as a UNESCO World Heritage Site in recognition of its importance as a finely preserved example of a large Roman colonial city on the fringes of the empire.

The excavated section of Volubilis is relatively small compared to the ancient city complexes of Egypt. However, the graceful columns and crumbling walls make for stunning photographs against the backdrop of the Moroccan countryside, and strolling through the historic ruins is a humbling experience. Be sure to visit the triumphal arch, located on the edge of the ruins; The forum with its imposing columns and what remains of the city’s basilica. The highlight of a trip to Volubilis is undoubtedly its restored mosaic floors, all of which are on view in their original setting.

The best are found in the house of Orpheus, the largest and most beautiful of the excavated private houses. Here you will find three stunning mosaics depicting Orpheus playing his own lute to an audience of wild animals, a dolphin, and Poseidon, the Roman god of the sea. The house also includes the remains of a private hammam , complete with hot and cold rooms and a solarium.

The Volubilis Ruins are open daily from sunrise to sunset. You will need to pay a small admission fee of 20 dirhams, and official guides can be hired at the entrance of the complex for 120 dirhams. Most people visit on a day trip from Meknes (22 miles/35 kilometers away) or Fez (50 miles/80 kilometers away). You can drive there yourself or hire a private taxi from the train station in Meknes. If you visit Fez, it is cheaper to take the train to Meknes and arrange a taxi from there than to book a taxi from Fez.

Alternatively, most riads and hotels in both cities offer organized tours to Volubilis. These generally include a stop at the mountain village and the holy pilgrimage site of Moulay Idriss. Check also transport with Moroccan Desert Tours.

If you want to visit for more than a day, you’ll need to book accommodation at Moulay Idriss, located just five kilometers from the Volubilis ruins. There’s a selection of atmospheric guesthouses and B&Bs to choose from, including the top-rated option Dar Zerhoune. Housed in a traditional Moroccan house, this b&b offers en-suite rooms, a restaurant specializing in authentic Moroccan cuisine, and a rooftop terrace with stunning views of Moulay Idriss and the valley ruins.

Guests can join daily walking tours from the B&B to Volubilis, passing through olive groves and local villages along the way.

Volubilis is a worthwhile destination year-round, and there’s no bad time to visit. However, the summer months can be incredibly hot, and there is little protection from the sun in the ancient city. If you choose to visit from June to August, be sure to bring plenty of water and sunscreen. The city is most picturesque in April and May when the surrounding fields are lush with spring wildflowers. For the best photos, try to time your visit at dawn or late afternoon, when the soft light gilds the ancient city’s columns with gold.