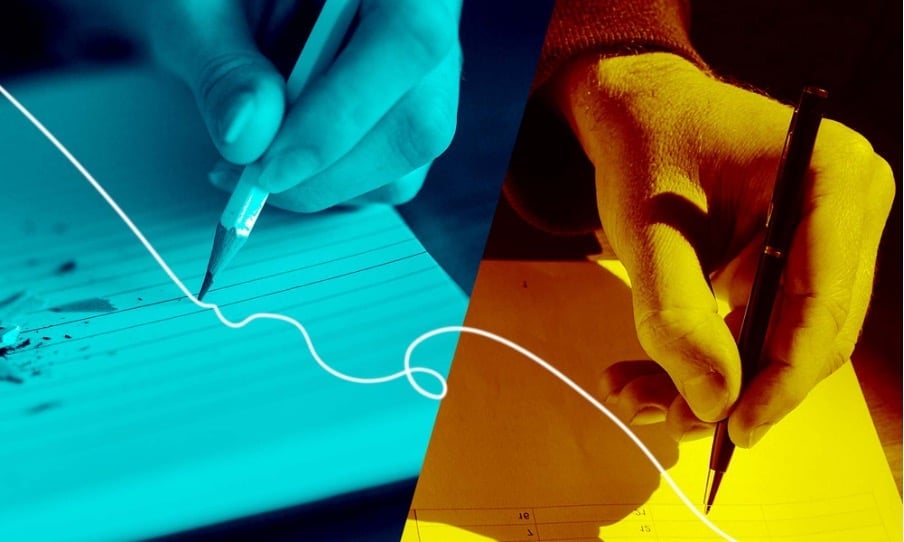 There are two main types of writing implements; pen or pencil, but which is better to write with and how do you make that decision for yourself? Don’t worry, we’re going to go through the pros and cons of both, so you know which is best for you.

First though, in case you were thinking, “what about chalk or crayons? You can write with them too”. That’s true, but just because you can, doesn’t mean you should. Let’s move swiftly on to the pen versus pencil debate.

Pens have a longer history than you might expect, with the earliest examples being recorded in around 3000 BCE. Of course, they wouldn’t look anything like the ones in your desk drawer, which are made from plastic and use a tiny ball to disperse the ink. The invention of plastic is a few thousand years off.

In roughly 500 BCE, ancient Indians invented ink and began dipping sharpened feathers into it to write on papyrus. Depending on your location, you might know these as reed pens, dip pens, or quills. These stayed in favour for much of human history but in 1945 CE, the ballpoint pen was invented.

This further democratized writing because it was easier to write with, didn’t bleed over the page, and was a lot cheaper than dip pens or fountain pens. Nowadays, you can even get custom pens to promote your business, like these from National Pen.

Pencils on the other hand have a shorter history because the graphite found inside No.2 pencils was only discovered in 1565. Originally, the graphite rods were used for sheep marking, but eventually they migrated into writing implements for the wider population after the wooden outer casing for pencils was created in 1790 by French scientist Nicholas-Jacques Conte. The basic design has remained much the same since, although many now come with an eraser attached.

Fun fact: Pencils are often called lead pencils despite not having lead in them. Some believe this is because pencils once used lead instead of graphite and this was phased out when we discovered the dangerous effects that lead has on humans. However, the inner rod was never made from lead. The graphite discoverers only thought that they’d found lead because the elements look so similar. (That still doesn’t mean you should put pencils in your mouth though.)

Let’s look at the differences to determine which is better for writing with.

From this we can see that pens are the superior writing implement, especially at work where faded writing would be a big problem. Pencils have their benefits but these are dwarfed by the pros of pens.