A museum is a hallowed shrine that may be unwelcoming to anyone reluctant to adopt the sincerity that viewing “great art” demands. It may be a frightening experience for many people. Perhaps the ornate marble stairways and classical columns give off a vibe of ostentatious seriousness. You rarely see a face grinning out as you walk down those magnificent hallways surrounded by works of art dating back hundreds of years.

The big smile has been seen as “profoundly unfashionable” for most of humanity’s recorded history. However, there are plenty of paintings with smiling figures. Take a look at some of these paintings with people smiling. 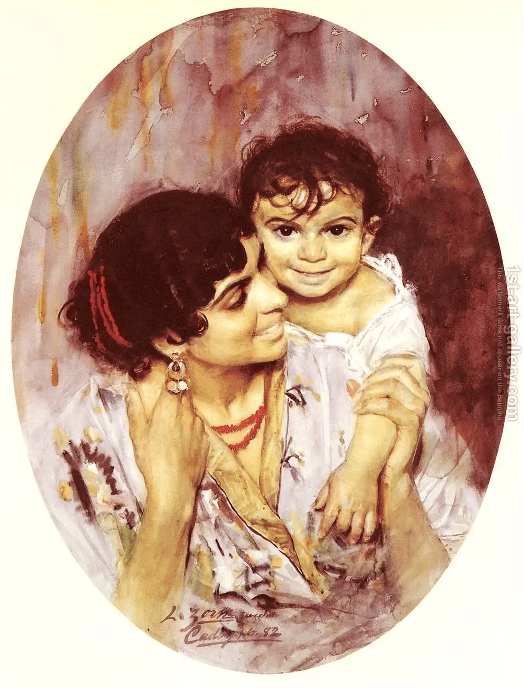 This lovely mother-and-son watercolor painting is difficult to interpret in terms of the storyline or the meaning behind its colors. Still, it stands out for the wealth it oozes, the joy it radiates, and the delicacy it conveys by expressing itself in a somewhat conservative painting medium. Additionally, Andreas Zorn is an expert in royal paintings. Thus this work of art readily demonstrates his talent.

The attitudes, facial characteristics, and photographic posture of the characters are some of the most notable features in this famous art of people. One has to assume that the excellence in quality in this painting is pretty high. It can be difficult to visualize how a skilled photographer captured a certain moment, which has only recently become simple to locate or observe thanks to master photographers. It is also amazing to see painters of Zorn’s caliber when they apply their delicate touches, like in a baby’s eyes.

The baby’s mischievousness is visible in his look and masculine features, which reveal a spirit that enjoys a little commotion around him. Due to the attention to detail and the title, which means “motherhood,” this highly prized watercolor work commands a fair market price.

According to popular belief, the couple in this famous people painting belongs to a Swedish royal dynasty from the late nineteenth century.

We are surprised to see a man dressed extravagantly in what appears to be Italian attire. He leans out the window and emerges from behind a tapestry. He makes an effort to interact with the audience by raising his glasses.

Honthorst’s depiction in one of the most famous paintings of people is so realistic and compelling that the fiddler appears to have snuck out from the painting’s frame to join us. Gerard van Honthorst’s colorful 1623 masterpiece was influenced by the Italian baroque painter Michelangelo da Caravaggio. Realistic, liveliness, and chiaroscuro are all evidence of Caravaggio’s influence (dramatic light-dark contrasts).

Knowing that Van Honthorst had returned after a protracted stay in Italy, where he became familiar with the newly introduced revolutionary style, this is no surprise. The picture also includes a strong endeavor to create the illusion of depth, which is more typical of the North European tradition.

Van Honthorst made numerous attempts to transcend the confines of two-dimensional space. He concealed the half-length image behind a window or other structure to imply depth. The cheerful musician appears to emerge from a nook in the rather hazy background, showing himself to us by shoving away the thick Persian carpet.

His outstretched arm with the wine glass appears to leave the picture area and enter ours, inviting us to join him in celebrating and listening to his violin.

Saint John the Baptist by Leonardo

The Louver in Paris houses this High Renaissance oil painting by Leonardo da Vinci, Saint John the Baptist. By employing the chiaroscuro technique, the piece isolates the image of John the Baptist, making it seem like it is emerging from a dark background. 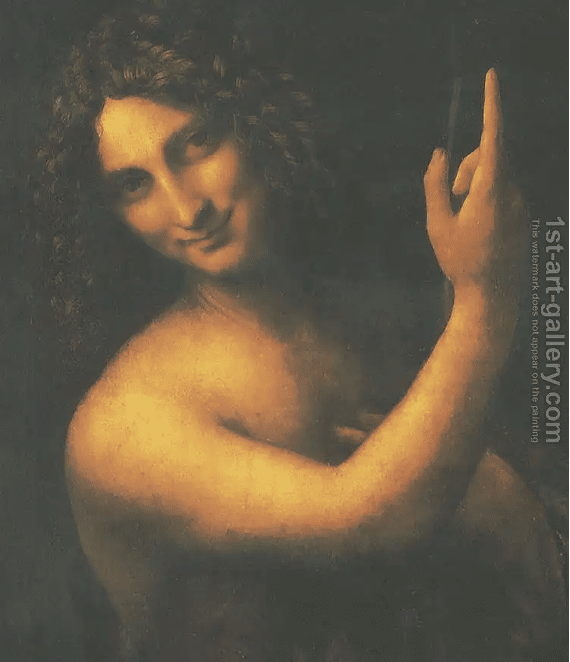 The saint resembles Leonardo’s renowned Mona Lisa since she is wearing furs, has long, curling hair, and smiles enigmatically. Like Saint Anne in Leonardo’s Burlington House Cartoon, he has a red cross in his left hand and is holding up his right palm towards heaven as he smiles.

Kenneth Clark observed the “sense of unease” that the painting evokes and said that for Da Vinci, Saint John signified “the perpetual question mark, the oddity of creation.” Leonardo clearly emphasizes the blurring of the lines between mind and flesh. The extremely erotically charged elegance of Leonardo’s figure yet carries a spiritual connotation to which Saint John alludes when he talks of the abundance of grace from God.

It is really dark in this artwork, literally. The only features you can clearly see up close are a set of eyes, a beaming smile with a chipped tooth, and a portion of what appears to be a shirt. In a sea of black, these are the lone white contrasts.

That being said, it’s somewhat ethereal. We might be unable to identify this as a person if we did not have a title to guide us. You may start to make everything a little bit better as you go closer and closer. There are two different colors of black, as you can see. A man with a hat and a blazer over his white shirt is outlined in a deeper black.

The background is lighter black. You can tell the man’s gums are pink even closer than that. The picture transitions from an abstract depiction of hazy human traits to echoes of a person to a man in full, based on how far away you are. In essence, it is what Marshall is attempting to convey through this self-portrait.

Many eminent artists have enjoyed thriving careers thanks to their exaggerated self-portraits, which are always characterized by maniacal grins. Behind these frozen smiles, masks are some profound social and political statements. Despite all the criticism directed towards gorgeous  paintings of people smiling, we art lovers know how unique these smiling paintings are.

Top things to do in LONDON

5 Important Factors to Consider When Buying a Business