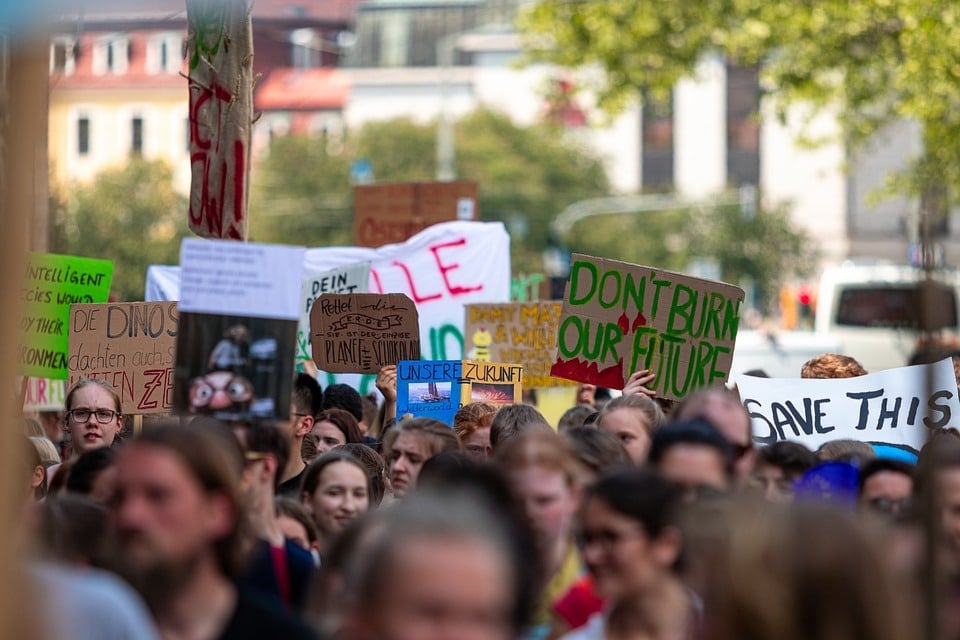 Greta Thunberg is a teenage climate activist who participated in activities to raise awareness regarding human-caused climate change as well as convince global governments to join hands in fighting it.

She began her in Sweden, where she initiated protests to push the government to put more effort against climate change. This sparked massive school walkout protests across the world. It’s believed more than 7.5 million people from 150 countries joined in the climate strike, and millions of others supported it virtually. The goal was to demand action on climate change.

Her determination to act and do what she believes in has inspired many across the world. Thunberg’s story holds some lessons, and this post will review what entrepreneurs can learn from her. Businesses need to realize that consumers are now eco-conscious, and this awareness will increase as the impact of climate change continue.

Identify Your Niche and Focus on it

Thunberg is passionate about climate change, made so many sacrifices, and built partnerships to help her pursue her cause. The teenager’s power to dominate social media is out of this world and has gained a lot of traction. Thunberg is now known as a climate and environmental activist.

Likewise, entrepreneurs should pick a niche they’re passionate about, pursue it and get known for it. Remember being everything to everyone is not a cause or niche; instead, you should make your goal very clear.

Thunberg is a young girl trying to save the earth from destruction. However, it’s hard to believe that there are haters attacking her noble goal and are actively working against this child. As a result, the teenager has to deal with more than her fair share of critics who flood her social media platforms with disparaging remarks about her initiative. While politicians made fun of her or dismiss her, one TV commentator labelled her mentally ill. She even had to turn President Trump’s tweet into her Twitter bio because she handles her critics with wit and confidence. Her experience shows that no matter how benevolent your idea is, there will still be people actively working to thwart you. Also, birds peck at the best fruit and this knowledge is what helps her when waters get choppy.

In the world of business, government bodies may pass legislation that cripples your business. On the other hand, competitors work hard to snatch your customers and discredit your products and services. But as an entrepreneur, you should learn about these potential threats and prepare for them. For instance, if you decide to take a particular stand on a political issue, you should realize that there will be people against what you are supporting, and so you should prepare to handle those potential consequences.

As an environmental activist, Thunberg doesn’t fly because the aviation industry has a big carbon footprint. The same applies to her parents, who support her beliefs. The same applies in business; entrepreneurs should build companies that reflect their values, which means making tough decisions and choices.

For example, fair trade supplies, a business that uses them pays more for them than the available alternatives. Taking a political stance openly means you will have to lose some customers. The same applies to other tradeoffs that you have to navigate in your business as it expands or as you make other important decisions on how it will run.

Thunberg passionately believes in her cause, and she is even ready to make sacrifices in order to drive it forward. For instance, she trekked for 13 days across the Atlantic Ocean by boat. She has faced tons of personal attacks from public bodies and figures. The French parties’ lawmakers actually described her as the Justine Bieber of ecology, a prophetess in shorts, and an apocalypse. At the same time, her speech and campaigning efforts were equated to a dictatorship of perpetual emotion, and as a result, they boycotted her speech. The teenager has Asperger’s syndrome, a type of autism, but she doesn’t view it as a challenge or the reason for criticism; instead, she views it as an advantage in her climate fight. She even calls it her superpower, contrary to how President Trump used it against her when he said,” 16-year-old climate and environmental activist with Asperger’s

As an entrepreneur working to be an innovator, transformer or changemaker, you are likely to threaten long-held norms and beliefs or disrupt the status quo. You will be labelled troublesome or vilified purely because of being a change agent, but you can boldly take on a change leadership position with resilience. It’s also important to realize that naysayers and opposition will always be there.

Your competitors may undermine, sabotage, create obstacles or criticize you because of fear of change but being resilient, following through with your purpose as well as cultivating a healthy relationship with social approval will help you accomplish your purpose and take your brand further.

Thunberg presented a 2018 UN climate study instead of a speech in her meeting with the US House of Representatives because her goal was for them to listen to the scientists instead of her. Further, at the British MPs meeting in Westminster, Thunberg described the UK’s carbon emissions as very creative accounting. Relying on data when delivering her speech helped strengthen her commitment and encourage measurable impact to be consistently reported.

Entrepreneurs should gather data because it will help them understand their customers, make better decisions, enable key strategic initiatives, as well as improve their relationship with business partners and customers. For instance, professional sports teams hire data collectors and analysts because they want to enhance their performance in the field. They update and review their data because they want their team to excel. Likewise, your marketing team needs data to understand how their campaign initiatives are doing or whether they are bringing in more money than what was spent as well as how the brand can build more personal and profitable relationships with customers.

Thunberg and Climate Change movement have achieved a lot but not in operating in a vacuum. If you search on Google, you will see that there are multiples of globally dispersed teams but are all working to achieve a common goal. A common purpose unites them and at the core of their operating model is a strategic alliance.

The lesson for entrepreneurs is that they should identify their allies, such as key partners that they can work with to take their cause forward. These individuals and organizations will defend you when you’re not in the room. Therefore actively seek alliances and build efficient networks that can propel your brand, support your purpose and accelerate your impact. Additionally, you can leverage collaboration tools to foster social cohesion.

Thunberg had a clear core message, and it was advocating for climate change action. In her 4 minutes UN speech, Thunberg clearly outlined the need for climate change action because this is what she passionately believed. The message had a few facts and figures to support her statement. She also added passion and emotion in her serious concerns to drive the message home. This is because she understood that humans are ridiculously irrational creatures, and only feelings and not facts would convince them, which is what she used in her message.

So create something informative but concise in your messaging campaign or any branded initiative to create awareness of your brand and products.

Thunberg consistently adhered to her principles in her climate change campaign. For instance, air travel leaves carbon print, so Thunberg sailed across the Atlantic to New York to protect the environment. So when you carry out any brand awareness campaign, whether online or otherwise, ensure that your message is genuine and avoid lying. Always stick to your main issue and repeat your goals in any communication. However, staying on the core message doesn’t mean you mindlessly be glued to the script. It means not being distracted from the main issues but making changes such as remove, replace, reinforce and more.

Further, Thunberg’s displays seriousness as she delivers her message. The teenager doesn’t smile while delivering her UN speech, and she also maintains composure even when participants applaud. Her consistent tone ensures that her message is unfailingly understood. Surprisingly Thunberg has a sense of humor, but she does so at the right time and place as well as in a manner that doesn’t compromise the tone and spirit of her message. So be consistent in your marketing initiatives to avoid compromising your message and confusing your target audience.

Possibly you heard about Thunberg for the first time when you listened to her UN speech, but you don’t know her journey and humble beginning. The then 15-year–old began her climate change awareness strike by cutting class to hold her activism outside Swedish parliament with her a sign “School Strike fir Climate”. It was after Sweden’s hottest summer that Thunberg went on strike for three weeks to get politicians to act. Her country had been struck by wildfires and heatwaves, making it the hottest summer ever, and this made it a worthy cause to jump-start her entire movement. Next was her impressive UN speech crafted from her smaller moments with her initial audience.

Entrepreneurs and marketers can learn from Thunberg that the extraordinary momentum she drummed up was not an overnight success. The exact route is followed in the business world, and they shouldn’t expect anything else. People are impatient, and so they want to skip ahead in the story to the page where they have grown their customer base to thousands of millions using the generous amounts of online tools. However, the best approach is to start small as you aim higher. The strategy will help you have a good foundation that won’t crumble during a crisis such as an economic downturn or pandemic.

Thunberg is only a teenager, but she understands the effects of climate change. As the environmental awareness continues, many young or older people will increasingly become eco-mindful and prioritize the environment when shopping. The changed consumer shopping habits show that most buyers prefer brands that are actively taking a position for something, and the older generation is rapidly following the trend.

Therefore, entrepreneurs who build brands that are not eco-conscious or environmentally sustainable will soon be replaced by those who do. Environmental activism will drive a huge wave of consumer behavior change, and shoppers will opt for companies that take a stand on issues they are so passionate about.

Entrepreneurs can learn so many lessons from Greta Thunberg, who pushes governments to take actions against climate change. Her determination to do what she believes in has attracted attention, and despite criticism from public bodies and figures, the teenager has built a global climate change movement. Likewise, entrepreneurs can take their brands to another level, make better decisions, form strategic partnerships, and build eco-friendly products.

“Don’t build products that you can’t sell” – Entrepreneurial Journey of a Kovai-man, Saravana