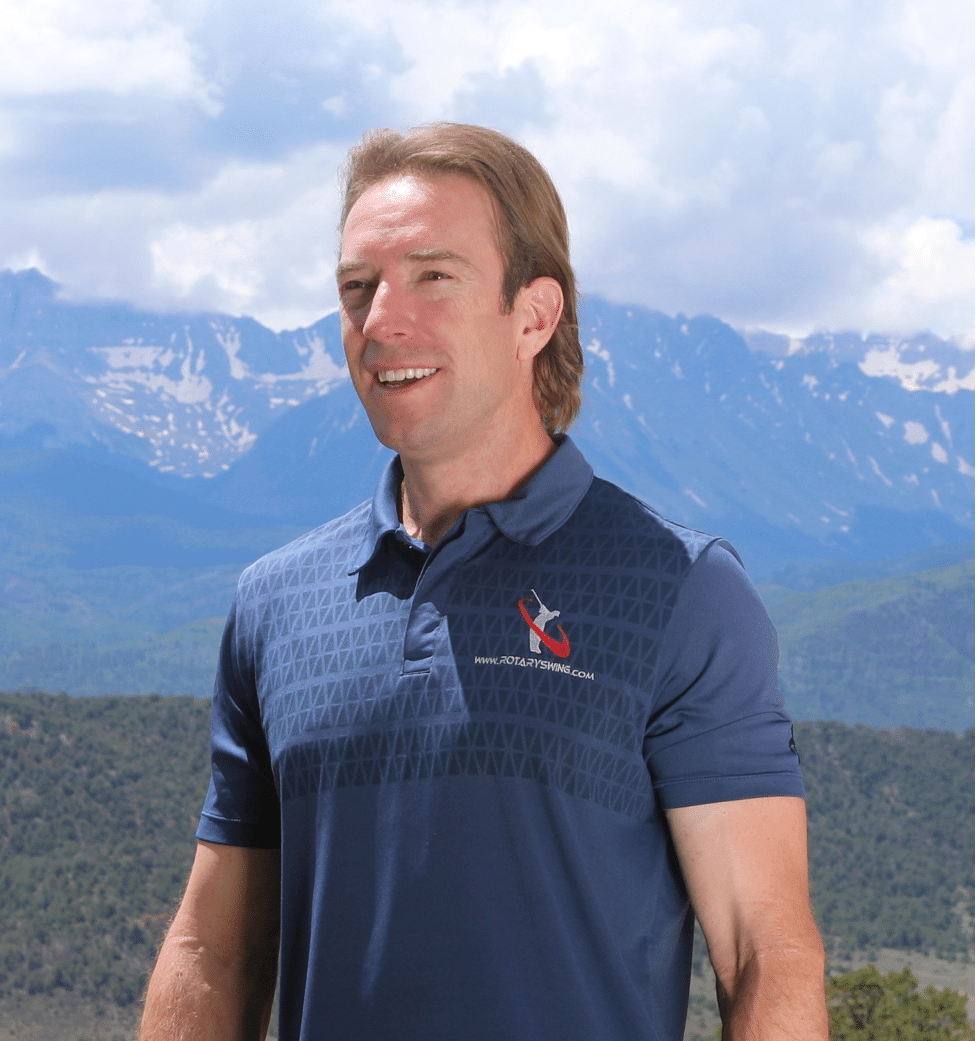 Rotary Swing Tour Instructor Chuck Quinton has taught and done research on the golf swing for more than 25 years. He has taught students of all abilities, including players on the PGA Tour.

The following is a Q&A with Chuck Quinton about the personal experiences that led him to focus on teaching golf and develop the Rotary Swing method.

I was 19 years old, and I hadn’t even taken a golf lesson yet. I was in between my senior year of high school and my freshman year of college. I’m doing handyman work around the neighborhoods, and I was cleaning this lady’s gutters. She said, “Hey, I heard that you’re a golfer. Would you mind giving my husband a lesson?”

I said, “I’m not a golf instructor. I’m a decent golfer, but I don’t know how to teach.” She’s like, “Listen, here’s the deal. He had a stroke. He lost the use of his right side, his right arm.” He hadn’t left the house in two years.

This guy, his name was Don, used to be the guy up there cleaning his gutters and taking care of his house. Now, after this debilitating injury, he didn’t want to do anything. He used to be athletic. He used to work out. He used to go do things, and now she just couldn’t get him out of the house anymore.

I take Don to the golf course and we hit a few balls in the range. Then he wants to go and play. Now, Don doesn’t really talk much, either. He had a speech impediment after the stroke. We go out on the golf course to play nine holes. I thought it was an absolute disaster. He’s topping shots. He hits a couple of good ones, but it’s random. I’m doing everything I can to try and help him hit the golf ball. But again, I only know how to teach him based on how I swing, and I swing with two arms.

The whole time we’re out there on the course, he hardly said a thing and I’m like, “He hates me. I don’t blame him. I don’t know what I’m doing. This is going to be a one and done kind of thing.” I take him home and say, “Thanks. I hope you had a good time.”

I get a call later that night from Don’s wife and she’s like, “Don hasn’t smiled this much in years.” It still kind of makes me a little emotional to think about it. To see this guy go from having his life taken away from him because of a stroke to all of a sudden realizing, “Yeah, I can still do stuff, I can be outside and I can do things that I enjoy,” had a huge impact on me.

What led you to focus on teaching rather than your playing career?

My lessons with all these coaches who didn’t help me get any better and just said, “Make fewer bogeys.” They were all just kind of leading me down the path to where I am today.

I could explain the swing the way that I understood it, and I was actually seeing better results with my students than I could with myself because I was still being taught by somebody else.

I had this little teaching practice going and this playing career. I was like, “You kind of have to make a decision on going one way or the other.”

I’m working with guys who are teaching major championship winners. Guys who were on TV beating Tiger Woods head-to-head in an event, and getting just the most nonsensical teaching advice like, “Well, just imagine that you’re moving the two by four back with your belly button.”

How did you go about testing your theories?

The first really big opportunity for that came with a guy named Dr. Jeff Broker, who had a PhD in biomechanics. He had seen a bunch of stuff that I’d published on my website, which has been up since 2005. We were the first golf instruction membership site on the net. I was publishing a lot of my ideas and I started picking up a lot more students and a lot more tour pros who liked what I had to say. Dr. Broker had also seen a lot of the stuff that I’d published on there and he was doing a ton of research at the University of Colorado.

We started doing a lot of work together. We did a ton of really cool research on grip pressure and using pressure plates, using understanding weight shift and dynamic ground forces and all of these things.

The cool thing about Dr. Broker was his background with the US Olympics Committee. He worked with the best athletes in the world. He was training Lance Armstrong when Armstrong was dominating everything. When he was working with these athletes, everything was completely objective. It was not like, “Well, my personal preference is that you kind of do this. Or if you have this issue, maybe try that.” It was like, “No, no, no, here’s the biomechanical research. Here, we’re going to go put you in the lab. We’re going to put you on force plates. Here’s the most efficient way to do it. Here’s the safest way to do it. Here’s the biomechanical issues that you’re going to run into. Here’s the anatomical issues you’re going to run into.”

I also worked with Taylormade Performance Lab because they bought the system called MAP technology. Basically, it was these nine infrared cameras that could measure the swing in real time and 3D and measure everything to a 10th of a degree. They had all this tour pro data and they could look at everything completely objectively. We could see not what we thought people were doing, but in real time, frame by frame, exactly what the body’s actually doing and what was leading to injury and all of those things.

That led to a medical panel. We had Dr. Brian McKeon. We had all these neurosurgeons, orthopedic surgeons who came in and said, “Yes, these ideas that you’re talking about, this is what will lead to injury. This is what doesn’t.” One of the biggest things we ever did is sitting down and asking those guys, “What’s the number one golf swing related injury surgery that you guys do?”

For me, I had always had hip and back problems. That’s what most people think of when they think of golf Is some sort of back and hip injury. But the reality is, all of them, all of these orthopedic surgeons said, it’s lead shoulder impingement. At the time I had no idea what that even meant.

As we started looking at things from an anatomical perspective and looking at what the body can and can’t do safely, and what type of movements lead to these impingement issues and all of these other injuries that we looked at, it became clear to me that this was the only way to teach the golf swing. I don’t care if it’s going to be a way to hit the ball 20 yards further, you can’t do it forever. That’s what matters. Golf is a game for a lifetime. If you’re doing things that are getting you injured, then you can’t play golf for a lifetime.

On our Facebook group recently, it’s been coming up quite a bit actually about Freddy Couples. He’s got this beautiful tempo and this great rhythm to his swing. It looks like Fred Astaire hitting a golf ball. But he has had back injuries his entire career. A couple of years ago, there’s an article in Golf Digest. He was 58 years old and basically said, “I can’t play golf anymore. It’s just not worth it. It hurts my back so much I don’t play anymore.” Yet so many people still look at his swing as a model.

Unless you start looking at the swing black and white, objectively in looking at what prevents injury, what causes injury, then to me, that golf instruction is worthless. Because if it leads to injury first, there’s no point.

Did your own experience with severe injury motivate you?

It kind of did. I had a really, really big accident. In 2011, I broke my neck on a 20-foot jump while mountain biking. I had a C1 burst fracture, which is a really, really bad idea. Very few people survive that. Then those that do are typically on a ventilator or paralyzed. C1 is your top vertebrae.

I bled out twice on the operating table. I had a blood clot that nearly killed me. I had all this horrible stuff. But after that, as bad as that experience was, it completely changed every single aspect of my life in a good way. Not just the stuff that I was doing, but from my golf instruction … Obviously I mean, I’ve had an impact on millions and millions of golfers who’ve seen my videos. But they’ve seen that that passion comes from experience.

Many thanks to Chuck Quinton from Rotary Swing!