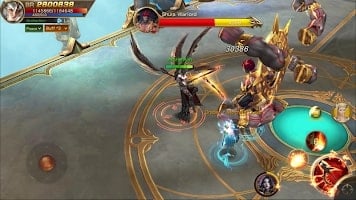 GTarcade developed the Era of Celestials. The storyline of this role-playing game puts a player in a fantasy place where they experience the new adventure of facing off enemies.

The game starts by the player first choosing their playable avatar, customizing it with various options and accessories, and getting into the field to fight against the enemies for glory and honor. Characters in this game have unique capabilities and playstyle.

Here is how to fight the enemies and make experience points to unlock additional content.

What Happens in The Era of Celestials?

After an extremely long march, the enemy army reaches the gate of the last bastion empire. Celestials quickly call for help because he is desperate and afraid. He also recruits great champions to fight against the enemy. This is where you now come in as a player to annihilate the enemy.

It’s now your role to respond to the call and participate in an electrifying battle for glory and honor. You prepare yourself for this great battle using easy-to-play controls, splendid visuals, and realistic sound effects. In fact, your main objective in this game is to restore order and security in your kingdom by serving as the bravest hero.

One way of achieving your objective is to transform into an Elysian in order to annihilate these enemies interested in destroying the kingdom by engaging in bloodshed. So you must build a dream team by gathering around fellow fighters.

In fact, catching powerful opponents in this breathtaking battle earns you huge rewards, making this game more thrilling and exciting. You can play Era of Celestials on PC with BlueStacks.

A player needs more than luck and judgment to win in the Era of Celestials. Actually, your skills are tested all the time, and you only become successful by idealizing the best strategy in every situation you find yourself in.

As a result, players need BlueStacks by their side because it brings the best out of them and uses their PC to its fullest potential. Thus if you want to enjoy Era of Celestials, use BlueStacks, take advantage of the convenience of the keyboard commands, speed of the mouse, PC big screen, and stability of your internet connection.

Features of this game

Script: You can automate all repetitive tasks in the game using BlueStacks Script. Further, you can write several commands to perform a set of actions that you desire to automate and bind to a single key.

High FPS: Enabling the highest FPS in the Era of Celestials gives you a competitive edge. As a result, you will experience smoother animations and crisper graphics.

Real-time Translation: You can play Era of Celestials in the language of your choice, thanks to BlueStacks. The real-time translation feature instantly translates the game into your local language when you press CTRL + Shift + L.

You can now enjoy playing Era of Celestials and other games such as Pro Evolution Soccer 2019 Lite, Smashing Four, Armajet, and much more.

Why Should You Outsource Human Resources?