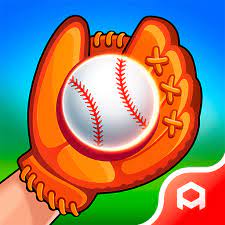 Actually, casual gamer loves it because like video games it helps them easily kill their 5-10 minutes. So then, here are tips to help you learn different abilities and players, complete various achievements, and explore different game modes.

The Super Hit Baseball has pretty simple mechanics, which are TAP and HIT. Blue is your team’s color, while red is for the opponents. The game has two innings, and in each innings, the player has to bat once but pitch the other times.

Players can control the batter and strike every ball thrown by the opposing pitcher with either left or right hand. When pitching, a player controls the type of ball that a pitcher throws and not himself. Players score bases by timing the tap causing the current batter to swing the ball to the card displayed on the board over the field.

Multiple colored cards change based on when you pitch or bat. Their size depends on the pitcher and batter level. That means higher levels have bigger cards.

You can use the practice mode to improve your skills. However, this mode has no rewards like others have.

The standard mode matches you with another player online. You can play in the available stadiums, but each has an entry fee ranging from 50 to 25,000,000 coins. Winners get double while losers lose everything.

The Mascot Hunt mode frequently changes the theme. You have to kill the mascot with a health of 1,000,000, and the ramps on the field are open for each shot. Every ball hit through the ramp deals 500 damage to the mascot. This mode gives you the milestones of rewards.

There is no limit on the number of pitches that you can bat, but each game costs 500 coins to enter. Three minions continuously move towards you, and the game ends when they touch you. However, you have the aid of power-ups to hit or kill the minions with the ball.

The mode allows you to bat to gain points from the wall. The game gives you 10 pitches and rewards on the collected points. There is just one free match each day, but you can also pay gems to access another game on this mode.

Players earn coins and card packs as a reward at the end of the game. In fact, the card packs have coins and gems, and you can unlock and upgrade players when you play and win different packs.

You can collect a set of players from the card packs or buy from the store with the gems or free pack on the store. You can use multiple player cards to upgrade the player power and size on the field.

The player Hotties uses his ability CLEAN UP to send players on any base to the home base and collect runs. Likewise, players have a special ability, and they can get triggered. Although the odd of activating players’ ability is random, you can still upgrade them to increase the chances.

Upgrading increases the ability activation percentage and the size of the field. In fact, bigger players have easier catch which gets them out, thus the role of fielders. Ninety players have different abilities and are classified according to their position and rarity.