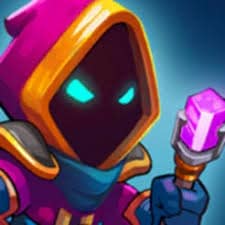 The real-time 1v1 duel game belongs to the strategy genre. It’s a game of wizards and elemental powers. Knowing how to match colors can help you fight other players and cast epic spells, thus making you the ultimate magical legend in the magical realms.

Your journey through this game unlocks new playable wizards and arms them with outstanding, evolving spells.

Here is what you need to get started with Super Spell Heroes, unlock new heroes and win the game.

You start the game as the sorcerer Zenron and unlock other heroes as you progress. Heroes use their spells, and you can unlock them on the world map. Monk Toben is found in the third area, while paladin Ray is in the sixth area.

New heroes are not acquired by transitioning to the desired area but by continuously winning the battles, completing missions in addition to helping the heavenly messenger.

A player gradually collects fragments of new heroes, but it’s necessary to continue with Zenron as they struggle with Evil.

Skill Rank: For instance, Zenron is a screenshot of 3. It’s shown as an asterisk and raises as the hero wins their battle lowers when they lose. That means the more the wins, the higher the skill rank and the more victory points you will get for winning the battle.

Rewards for Improvements: It’s depicted as a bar. The bar fills as you pump more spells at that level.

The Amount of Hero Keys Received: A hyphen displays the hero keys. The first number is yours, while the second is the number of keys per level.

Skill Level: All heroes have their own skill level based on their ability to cast powerful spells they have pumped. Heroes are rewarded for improvements based on the spells they pump. Each hero moves to a higher level when they receive the necessary amount of improvement rewards in the present level. However, raising the hero’s level increases its energy.

Victory Points: It’s displayed as an inverted triangle with gold in the middle. Players get victory points each time they win the battle.

Spells Categories: Spells are available in four categories and opened in ascending order in the battle. This includes Basic or initial spell, improved designated by green gem and stronger than the base, elite depicted by blue gem and higher than improved and highest shown by a purple gem and the most powerful spells.

Spell Elements: These are fire, nature, shine, land, and water.

Tips for Winning the Battle

Continue practicing this game and other games such as Indie Game Battle, Archery Talent, and more.